Migration and Refugee Crisis in Europe

The Gifford Center sponsored a conference on the migration and refugee crisis in Europe October 13, 2015 at the UCD Law School.

EU integration in migration is exemplified by two policies: (1) the Dublin Regulation that requires asylum seekers to apply for protection in the first EU member state they reach, and makes that state’s decision on all EU member states and (2) the Schengen Area, which abolished border checks between 22 of the 28 EU member states. EU member states retain sovereignty over many important areas, including taxing and spending, where overspending led to the Greek financial crisis, and immigration, since EU member states decide how many immigrants to accept and what procedures newcomers must follow to become naturalized citizens.

Many European countries are aging and shrinking, prompting EU bureaucrats and leaders of many EU member states to argue that Europe must open itself to migrants to stabilize populations and labor forces. Many EU citizens are skeptical of more migrants, in part because foreign-born residents are often less likely to work and more likely to receive welfare benefits. These economic worries can be exploited by political parties that rail against “Brussels” or the EU bureaucracy and “different” migrants. An August 2015 Eurobarometer poll found that immigration was the top concern of almost 40 percent of Europeans.

Until summer 2015, the major route for migrants to Europe was from Libya to the Italian island of Lampedusa. After several overloaded ships filled with migrants sank and hundreds died, the locus of migrant smuggling activity east, toward the Turkish-Greek border. Turkey hosts two million Syrians and allows nationals of many countries to arrive without visas. Migrants bound for Western Europe made their way to Izmir, Bodrum, or other Turkish coastal cities from which it was a short boat ride to Greek islands and, from there to Piraeus and on to Germany.

On August 25, 2015, Chancellor Angela Merkel announced that Germany would suspend the Dublin convention for Syrians, meaning that Germany would not attempt to send Syrians who transited Greece, Hungary, or Austria en route to Germany back to one of these countries. The result was a river of migrants, including over 12,000 who reached Munich on September 12, 2015. Transit countries changed their policies several times, first opening and then closing their borders to Syrians and others, with Hungary taking the hardest line against migrants trying to transit to Austria and Germany.

With Dublin suspended, the next casualty was Schengen, as countries re-introduced border checks in a largely futile bid to prevent asylum seekers from passing through to other countries. Most migrants were intent on reaching Germany, the country with the largest and strongest EU economy.

Once in Germany, asylum seekers are distributed to states and cities according to their population and income, and states and cities are expected to provide them with housing and food while their applications and appeals are heard. Germany has been trying to speed up the processing of asylum applications to more quickly distinguish those who can stay from those who must leave, but the process often takes several months, during which asylum applicants cannot work. Over 70 percent of asylum applicants are men, and men standing around in cities sometimes contributes to anti-foreigner sentiments.

Merkel heads a coalition government that involves three political parties: CDU, CSU, and SPD. Merkel’s welcome to Syrians appears to have also encouraged migrants from other nations to move to Germany, prompting opposition from her own party as well as coalition partners. The CSU, which governs in Bavaria, the port of entry for most migrants, has been vocal about calling for limits on the number of migrants and for establishing border processing centers where economic migrants from the Balkans can be quickly denied asylum and returned. 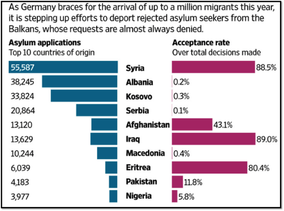 Germany has one of the EU’s strongest economies, with an unemployment rate of about six percent, one of the lowest rates in the Eurozone. The major questions are how quickly Germany can process asylum seekers and integrate those who are allowed to resettle in Germany by getting them into jobs. Many of the Syrians are well-educated, often with college degrees, and some are optimistic that German firms complaining of labor shortages will quickly embrace the migrants and get them into jobs.

The 28-member EU has a population of about 500 million and a labor force of 245 million that is shrinking. If Germany and other EU member states can quickly integrate those who arrived in summer 2015 into the labor force quickly, their arrival may be looked at in the future as an economic plus for the migrants and for Europe. If integration is slow or there are terrorist incidents associated with the newcomers, the result could be a strengthening of anti-migrant political parties.