Australia began receiving migrants from Afghanistan and Sri Lanka after 2000 who arrived by boat from Indonesia and applied for asylum. Many paid several thousand dollars for trips to Malaysia and other countries that did not require them to have visas, and then arranged for smugglers to take them via Indonesia to Australia.

Prime Minister John Howard responded in August 2001 by declaring that “We decide who comes to this country and the circumstances in which they come.” Howard developed a "Pacific solution" to the boat people, sending migrants headed to Australia by boat to island nations such as Papua New Guinea, Tuvalu and Nauru to make their asylum claims. Australia paid these countries to process and care for boat arrivals. 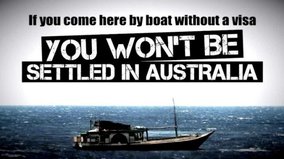 Howard blamed smugglers for enticing migrants to make the trip to Australia. The Australian government supported campaigns in migrant countries of origin to discourage migrants from setting out for Australia to claim asylum. Josh Watkins explored the use of “overseas public information campaigns” to discourage boat people, focusing on the ads developed and disseminated by private firms and IOM to persuade potential migrants that taking an expensive and risky trip to Australia was not economically worthwhile.

These ads treat potential migrants as rational economic actors because the first step in the migration process is to pay a travel agent or smuggler, that is, they aim to persuade migrants not to throw their money away in what the Australian government says will be a futile effort to reach Australia. Most of those headed to Australia have a mix of economic and other motives, since they could have found refuge closer to home. 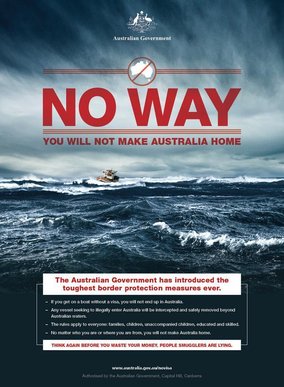 Watkins reviewed Australia’s overseas public information campaigns, emphasizing that it is very hard to evaluate their effectiveness because there is no census of people who are considering migrating and requesting asylum, so there is no way to know how many were discouraged by the ads. Furthermore, organizations that receive and spend Australian government funds to develop and run the ads have incentives to enlarge the pool of potential migrants and to argue that the campaigns discourage migrants so that they continue to receive funding.

Governments struggling with unwanted migration face difficult choices. They often resort to symbolic actions to soothe populations frustrated by unwanted migrants, especially those arriving by boat. The US sent Cubans and Haitians who tried to get to Florida by boat to Guantanamo, a US territory where US immigration laws do not apply, while Italy and Spain negotiated with Libya and Morocco to halt boatloads of migrants headed for their shores. Governments dealing with migrants arriving by boat often face difficult policy choices, and the often symbolic policies they follow such as ad campaigns abroad are more often dictated by short-run political factors than a longer term understanding of the factors motivating migration.