The Impact of Refugees on US Students 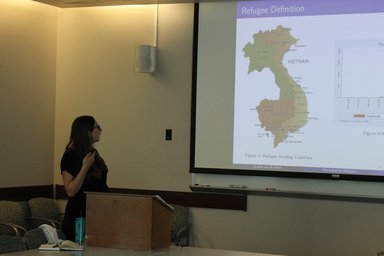 Economics graduate student Cynthia van der Werf Cuadros examined the effects of refugees resettled in the US on the achievements of US students in the same zip code. Indochinese refugees arrived in waves, with first waves including better educated and wealthier persons than later waves.  The refugees were resettled in areas where they could become self-sufficient quickly, and Van Der Werf Cuadros found few significant effects of the children of refugees in local schools on US-born children. Economics graduate student John Blanchette

The number of asylum seekers worldwide has reached its highest point in history. Over 120,000 refugees entered the U.S. including large numbers of children and there is uncer tainty about how this inflow will affect native children’s schooling outcomes. To fill this gap in the literature, this paper studies how the largest inflow of refugees in U.S. history–Indochinese refugees at the end of the Vietnam War – affected U.S. children. Then, it examines whether native children’s academic achievement was lower in ZIP Codes with higher shares of refugees using the National Education Longitudinal Study (NELS88) and U.S. Census data. Preliminary results suggest that, on average, there is no effect on native’s school choice or academic achievement, there is a small increase in the likelihood of graduating from high school, and there is a small reduction in the likelihood of obtaining an associate degree. Moreover, the effects are stronger for native students in disadvantaged conditions.

To briefly summarize, this paper uses variation in the settlement patterns of Indochinese refugees in the 1970’s and 1980’s to examine whether the presence of refugees had any effect on the test scores, post-secondary educational attainment, and school choice of native children after controlling for observable characteristics.  The paper finds no effect on test scores, some increase in graduation rates and a small decrease in native students obtaining an associates’ degree.