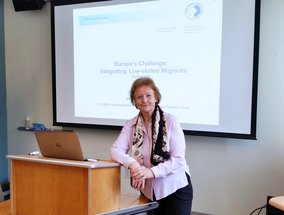 The Gifford Center sponsored a seminar April 17, 2017 by Gudrun Biffl, Professor of Migration und Globalization at Donau University and a long-time advisor to the Austrian government and the OECD on labor migration.

Europe received over a million migrants seeking asylum in 2015 and 500,000 in 2016. The skills of these newcomers vary, but many are low-skilled. Biffl discussed the challenges confronting governments, employers, and unions as well as the migrants seeking to integrate in Europe. She noted that finding the right balance between investing in migrants to help them to obtain good jobs versus taking a tough-love approach and expecting migrants to become self-sufficient quickly could be difficult at a time when populist parties are on the rise.

Austria had a labor force of 4.4 million in 2015, almost 19 percent foreign born, including 60 percent who were from other EU countries; many intra-EU migrants in Austria are highly skilled. Some highly skilled migrants from the new European Union Member States (EU-MS) in Central Europe work in Austrian jobs that do not use their education and qualifications; Austria’s higher wages allow down-skilling that benefits Austrian employers who hire well-qualified EU migrants to fill low-paid jobs with difficult working conditions. Poles and others who do not speak German fill low-level jobs in tourism, care services and similar jobs. 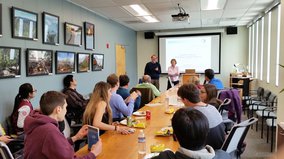 Few of the current wave of refugees and foreigners with subsidiary protection can find a regular job without upskilling or retraining. Austria introduced a one-year integration program in 2017 that requires refugees to participate in language training and other integration measures in order to receive support services and welfare payments; refugees receiving public support must also do community and voluntary work until they are job ready. Participation in such work does not affect the regular labour market, but allows the establishment of social ties with the local community while teaching local work practices and behaviour patterns.

The Austrian government spent €1.3 billion  (0.38% of GDP) on asylum seekers in 2016, most on basic income support, raising the question of how much governments in countries with asylum seekers should spend to prepare newcomers for jobs versus expect them to find jobs on their own. Germany in 2006 made changes to labor market and social welfare policies that created many more low-skilled jobs, including €1 per hour mini jobs. Other EU countries resist "fostering inequality" by encouraging more low-wage jobs, raising the question of how much tax money can be "invested in newcomers" without a backlash from taxpayers.