The Gifford Center co-sponsored a workshop on the status of farm labor in summer 2015 for 20 participants from federal and state agencies and UC.

Three themes were discussed. First is the lack of new farm workers, so that crews that would have had 35 workers in the past today often have 30 or 32, which means more hours of work for available workers to get work done. Employers are responding with some combination of 4-S’s:

Most farmers do not believe that higher wages and more benefits would persuade more local workers to fill farm jobs. Instead, with prospects for ever-tighter supplies of US workers (including unauthorized in the US), most are planning for mechanical aids to make farm work easier, labor-saving mechanization, and supplementing current workers with H-2A workers. For the first time in decades, availability of labor is being considered in crop planning decisions.

Second, the fastest growth in California farm worker employment in the past decade has been in berries, as especially strawberry production expanded. Tighter labor supplies, less available land, and stable or declining grower prices have stalled this expansion, with a shakeout of less productive growers likely. Monterey country produces 3.5 times more strawberries than Santa Cruz county, but vegetable growers in Salinas may be less willing to rent land to strawberry growers than they were in the past for several reasons, including better vegetable prices and fewer desirable residual effects of strawberry fumigation for vegetable crops.

The third theme was the UFW and the fourth year of drought. The UFW is the dominant farm worker union, with 7,000 active members and 25-30 contracts, including 10 in the Salinas Valley. California agriculture used about 33 million acre-feet to irrigate eight million acres in 2010.  The drought reduced the amount of water in 2015 by about 10 percent to about 30 million acre feet and led to the fallowing of an estimated seven percent of irrigated farm land (542,000 acres). Some 10,000 farm jobs may be lost, but California agriculture has been adding about 4,000 year-round equivalent jobs a year recently, so farm employment in 2015 is nonetheless likely to be higher in 2015 than in 2011 before the drought began.

The slowdown in Mexico-US migration since 2008 has reduced the share of newcomers among farm workers to two percent. Farmers worried about farm labor shortages are adopting a 4-S strategy, but their response \ varies by commodity. Many are embracing several strategies simultaneously, such as improving wages while introducing mechanical aids and exploring mechanization while building housing for H-2A workers. Some growers offer their current workers bonuses for each worker they refer or bring into the crew, such as $250 for each worker who is hired and stays with the employer for 30 or 60 days.  Some employers have production and end of season bonuses, so that any worker picking at least 5,000 or 10,000 trays of berries over a season gets a five cent per tray bonus.

The major decision facing growers is how much to invest in each of the four 4-S strategies, especially given the cost and difficulty of building housing for H-2A workers in coastal counties. Tanimura & Antle is one of the largest US fresh-vegetable producers, and plans to build apartments for 800 workers near its headquarters in Spreckels, a town of about 900 people. There is widespread agreement that Salinas lacks affordable housing for farm workers, but there is nonetheless some local opposition to doubling the population of Spreckels with what are likely to be solo Mexican-born men. T&A plans to invest about $8 million for 800 beds, or $10,000 a bed, to build housing for local and H-2A workers.

Berry employers in the Santa Maria area, which produces a quarter of California strawberries, are building housing for H-2A workers and putting workers in homes in residential areas of Guadalupe, where the large number of workers in one house has prompted complaints from nearby residents.

Many vegetable firms are steps to stretch the labor force and substitute machines for workers. Iceberg lettuce is typically seeded and thinned by hand crews so that there is one plant every 10-12 inches. There are two options to reduce the need for hand thinning crews. First, $180 worth of seeds per acre can be planted, and a machine can spray fertilizer on plants that spout between the desired 11 inch spacing, killing them and leaving fewer plants to produce larger heads. Second, lettuce seeds can be started in a greenhouse and transplanted by inserting them into a tape that plants them with the desired spacing mechanically, eliminating the need to thin by hand or machine.

Another example of making farm work easier is tall-stalk or Performance Broccoli by Monsanto. Growing a single stalk of broccoli with a larger crown higher in the plant reduces the amount of stooping and makes workers more efficient, since they cut one rather than to cut and bunch multiple stalks (tall-stalk broccoli is also easier to harvest by machine).  Similarly, Frescada lettuce, a mix of iceberg and Romaine, has a football shape and stands up right, making it easier to cut. Brilliant White Cauliflower resists sun burning and eliminates the need for workers to wrap plant leaves over the head and for harvesters to unwrap them to determine plant maturity.

Mechanizing pre-harvest tasks in lettuce is likely to occur faster than mechanical harvesting. Iceberg lettuce is cut, the outer leaves removed, and then heads are placed in boxes (naked pack) or placed in plastic bags and boxed on slow-moving conveyor belts that travel through the fields. Even bulk iceberg lettuce that is chopped into salads is typically harvested by hand because of the need to remove outer leaves. However, specialty lettuces such as baby leaf and spinach are harvested by machine, and romaine hearts, the fastest growing segment of the lettuce category, can be harvested by a machine that uses a jet of water to cut the lettuce, after which it is conveyed to workers who place it in bulk packs to be sent to fresh-cut processing plants. 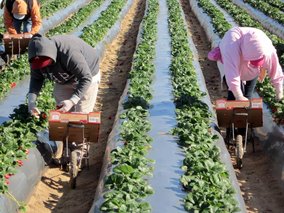 California farm sales were $45 billion in 2012, almost 50 percent more than #2 Iowa, where farm sales were $32 billion. Farm sales are divided between crops, $32.6 billion and 72 percent of farm sales, and livestock, $12.2 billion in sales. Within crops, fruits and nuts were worth $17 billion, and over half of the value of fruits and nuts came from grapes and almonds. Vegetables and melons were worth $6.8 billion, and lettuce worth $1.4 billion was a fifth of the value of all vegetables. The value of field crops was $5 billion, including a quarter from the hay grown primarily to feed to dairy cows.

California dominates production of strawberries, with 70 percent of the 60,000 harvested US acres in 2014 and 90 percent of the three billion pounds produced. California also dominates the production of leafy green vegetables including lettuce, broccoli, cauliflower, celery and spinach. In 2014, Monterey county vegetable crops were worth $3.1 billion, or almost 70 percent of the county’s $4.5 billion in farm sales. Since 1994, the value of Monterey county leaf lettuce (Romaine) tripled in real terms to $775 million in 2014, when there were 65,000 acres of leaf lettuce in 2014 versus 44,000 acres of head lettuce.

Production of strawberries and raspberries is stabilizing after very rapid growth. Since berries are a very high revenue and potentially profitable crop per acre, berry growers can afford to pay more in rental payments for land, $4,000 to $5,000 per acre for land worth $100,000 per acre in the Oxnard area where some of the farmland is owned by pension and other investment funds, and $3,000 in the northern end of the Salinas Valley, where so-called Blanco land is worth $40,000 or more an acre, versus $30,000 or less in the warmer southern parts of the Salinas Valley.

There are changes on the horizon for California berry production. Farmers have traditionally farmed to maximize production, but fewer newcomer farm workers means that some farmers are rethinking how they grow produce to make farm work easier. With farm workers continuing to exit for nonfarm jobs and fewer newcomers, some farmers are rethinking how they grow crops to make farm worker easier and more appealing to farm workers. For example, slow-moving conveyor belts eliminate the need for pickers to carry trays of strawberries to the end of the row to receive credit for picking them, and growing raspberries with substrate in containers and training the vines makes it easier to pick the berries while standing up on flat rather than uneven ground allows workers to pick faster.

Stooping to pick strawberries could be reduced with higher beds, two- rather than four-row beds that make berries easier to see and pick, and better farming so that workers must cull less bad fruit; such changes could make workers 20 to 25 percent more productive. Driscoll’s, which gets about 40 percent of the CA and Mexico strawberries it sells from Reiter Brothers farms, has a variety of worker-directed conveyor belts to reduce walking; the $35,000 Mercado machine for seven workers enables workers to pick 40 percent faster. Picking berries at night may be more appealing to some parents with children and save on cooling costs (berries should be cooled soon after harvest to preserve quality).

There are also strawberry harvesting machines in development. The most promising Agrobot model has 20+ arms that cost $2,000 each to pick strawberries, . Strawberries for machine harvesting must be grown in raised rows with vines trained so that ripe berries hang over the sides.

The UFW has 10-Salinas valley contracts with Amaral, D’Arrigo and Huntington Farms in vegetables, Monterey (two contracts), Mushroom Farm, and Countryside in mushrooms, Dole and Swanton in berries, and Scheid in wine grapes. The D’Arrigo contract covers only D’Arrigo’s CA workers, whose number peaks at about 1,300. There are about 1,000 workers employed under the mushroom contracts, and perhaps 400 employed by Dole Berry.

The UFW reports that Salinas-area farm workers are eager to work in mushrooms because these jobs offer year-round and indoor work that enables workers to earn $20,000 or more a year. Workers are less eager to work at Dole Berry, where many of the Oaxacans say that Dole Berry insists on fast work and high quality, prompting some to leave for non-union farms and perhaps a way for Dole to justify expanding the use of H-2A workers at Dole Berry in Salinas (Dole’s strawberry operations in Oxnard employ more workers). Dole is using H-2A workers in Salinas, and the UFW believes that they should join the union and pay three percent dues; Dole disagrees.

The UFW has a three-year 2013-16 contract with D’Arrigo. Under UFW contracts, some workers are allowed to take time off and act as member-organizers for the UFW, going to non-union farms and explaining the benefits of union membership. D’Arrigo’s contract includes the UFW’s RFK health care plan, for which the employer pays about $3 an hour for workers and their families. Workers do not make monthly payments, but they share costs on an 80-20 plan under RFK. T&A  and many other vegetable growers provide health insurance for their directly hired workers, but not employee families.

Salinas-area farmers expressed more concerns about labor than water in summer 2015, since they rely largely on groundwater. Most San Joaquin Valley farmers compensated in 2015 for less surface water from federal and state water projects that move water via the Sacramento-San Joaquin river delta by pumping more groundwater. Ground water levels are dropping and land is subsiding in the San Joaquin Valley, suggesting that compensating for lost surface water with ground water is not sustainable.

Shifts away from these big 4 water using crops would likely be accelerated by water marketing that clarified rights to water and facilitated water sales. Currently, all members of irrigation districts must generally agree in order for one member to sell water, and some farmers oppose water sales because they worry about second-round employment effects in areas selling water. However, if the drought persists, more water marketing seems inevitable.