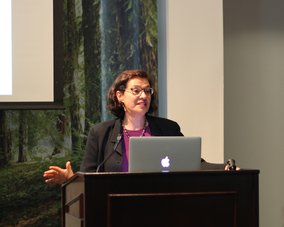 Pulitzer Prize winning journalist Sonia Nazario met with 20 students over lunch, and with over 200 faculty and students in the evening, to discuss the push and pull factors that attract Central American children to the US with a diverse group faculty and students. The book follows a Honduran boy seeking his mother in the US through Mexico.

In summer 2014, large numbers of Central American youth and women and children arrived in the US and applied for asylum. The US government pressured Central American governments to stop the exodus by e.g. prohibiting bus companies from selling tickets to youth traveling alone and requiring women to have written permission from their husbands to take children abroad, and President Obama proposed a $1 billion aid package to help El Salvador, Guatemala and Honduras to cope with gang violence. 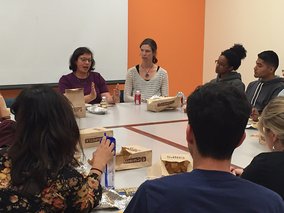 Students asked many questions about Nazario's first-hand experience with the migration of US-bound unaccompanied child migratory journey through Central America and Mexico. Many of the students had read her book, so they discussed ethics, safety, and the relationship between the journalist-investigator and the migrants.

Nazario's most recent trip to Enrique's Honduran community of origin leads her to expect outmigration for the foreseeable future due to corruption, crime and violence, extreme inequality, abject poverty and lack of economic opportunities. These factors combine to push people out of the Northern Central American Triangle.