November 8, 2016: Global Population and Migration Challenges in the 21st Century 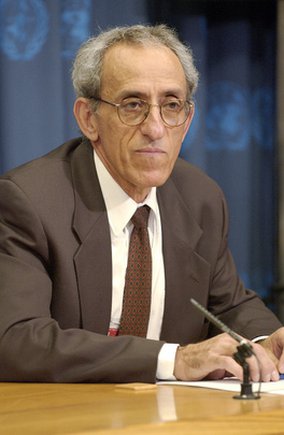 The Gifford Center hosted Joe Chamie, ex-director of the UN’s Population Division, on November 8, 2016 to discuss global population and migration challenges. The second half of the 20th century was a period of rapid population growth. The world’s population doubled from three billion in 1960 to six billion by 2000. There was also a sharp increase in the number of nation states, so that people moving in search of economic opportunity and freedom from persecution often crossed international borders.

Population Aging: The Historic Reversal of Children and Elderly

In 2015, there were 30 countries with declining populations, including Japan and most European countries, a number expected to double to 60 countries by 2030. In declining-population countries, there are more 65+ persons than children under 15, an historic reversal of the past when children outnumbered the elderly by 10 to one or more.

Chamie emphasized that Italy was the first country to have more elderly than children, reversing the usual children outnumber elderly in 1995.  Today there are three children under 15 for each person over 65 among the world’s 7.4 billion people, but there is a wide variance between countries, from 12 children per elderly person in Africa to less than one child per elderly person in Europe. In 2075, there are expected to be more 65+ persons than children under 15 globally, reflecting longer lifespans and declining fertility (www.ipsnews.net/2016/08/the-historic-reversal-of-populations/).

There are many implications of the historic reversal of age structures, including for government support programs that often transfer monies from working-age people to children and the elderly. Longer lifespans mean the elderly can anticipate more years of government-supported health care and pensions. Many governments are reluctant to reduce transfer payments to the elderly because they vote.

Chamie emphasized the changing Potential Support Ratio, the ratio of people 15 to 64 to those 65+.  In 1950, when the median age of the world’s people was 23, the PSR was 12, meaning 12 persons of working age for each elderly person.  Today the PSR is eight, and is projected to be four in 2050, with the fastest declines in the most-rapidly aging societies. Japan, Italy and Germany illustrate the challenge of falling PSRs, as a third of their populations are projected to be 65+ by 2050, only slightly smaller than the half who are 15 to 64.

The easiest fix for falling PSRs is to change the goalposts, to redefine working and retirement so that normal expected working lives are 15 to 70 rather than 15 to 64.  Making such a change would return the global PSR to its 1950 level of 13 to one, as more people work longer and draw pensions for fewer years. Countries could maintain their current PSRs by raising the retirement age, to 72 for the US and to almost 80 for the most rapidly aging countries such as China and Korea (http://yaleglobal.yale.edu/content/number-workers-retiree-declines-worldwide).

There are about 250 million international migrants, persons outside their country of birth a year or more. The arrival of over a million foreigners seeking asylum in Europe in 2015 highlighted the challenge of managing migration under an international framework erected after WWII, when there was guilt about people perishing because governments were reluctant to give them refuge from Nazis. The UN adopted a refugee convention in 1951 that obliged governments not to refoul or return persons to persecution in their country of citizenship, and the ILO in 1949 called on governments to treat migrant workers inside their borders equally.

Most migrants are not refugees, fewer than 20 million or less than 10 percent of the world’s migrants are refugees. Furthermore, most refugees are from developing countries and seek shelter in neighboring developing countries, as with Syrians in Turkey. However, globalization has made it easier to learn about opportunities for safety and higher wages further abroad, and settled migrants in many countries can provide both information and assistance to friends and relatives who want to join them.

The result is a rapidly expanding migrant smuggling business. Governments have tried to keep out unwanted migrants by building fences on their borders, patrolling nearby waters to intercept boatloads of migrants, and paying transit countries to prevent exits. Despite these steps, millions of people would like to migrate, fueling a business that allows smugglers to charge $1,000 to $10,000 to move a migrant from one country to another. Despite information campaigns warning migrants that they will not be welcomed, many migrants know that once they get into an industrial country, it will be hard to remove them.

Governments are struggling to respond. The influx of Syrians and others to Europe in 2015 led to an EU-Turkey agreement that promised EU aid to improve conditions for Syrians in Turkey and a promise by Turkey to accept back any migrants who left its shores without visas. As a result, unwanted migrant routes shifted to the central Mediterranean, where Africans and others board smugglers’ boats in Libya bound for Italy. With EU and private ships waiting to rescue migrants just outside Libya’s territorial waters, smugglers have been able to put migrants on less seaworthy boats, an example of moral hazard, as when reducing the penalty of risky behavior induces people to take more risks. Migrant deaths in the Mediterranean rose to 3,500 in 2016, while over 160,000 others, led by Nigerians and Eritreans, were taken to Italy.

The UN held a high-level summit on migration and refugees September 19, 2016 that concluded with a commitment to better protect migrants, to share responsibility for refugees, and to develop a global compact to promote safe, orderly, and regular migration, with a summit scheduled for 2018 to assess progress. Human rights norms say that everyone has a right to leave their country, but not the right to enter another country. The richer industrial nations to which many people would like to move are reluctant to open more migration channels for fear that migration could get out of control.

The US is a nation of immigrants unsure about how to manage migration in the 21st century. Some 44 million residents were born abroad, 14 percent of the 320 million US residents, and they include 11 million foreigners who are not authorized to be in the US.  Presidential candidate Donald Trump called for a wall on the Mexico-US border to deter migrants, and a deportation force to remove them, while Hillary Clinton called for a path to citizenship for unauthorized foreigners in the US.

The US is the world’s major destination for immigrants, accepting over a million a year.  Many more people would like to move to the US, over 200 million by some estimates, making it clear that the US could attract more immigrants. By increasing immigration to 10 million a year, the US could become the world’s most populous country by 2100, with 1.6 billion people. Having five times more people would greatly expand the US economy and labor force, but at the expense of more congestion and perhaps a changed culture and society.