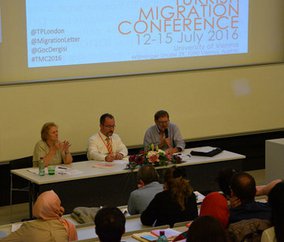 The Gifford Center co-sponsored the Turkish Migration Conference, which attracted about 400 participants to the University of Vienna. Over four days, some 350 papers were presented in plenary and parallel sessions.

Migration was in the headlines around the world in summer 2016. Europeans debated how to reduce the influx of unwanted foreigners and integrate those who are settling, the US presidential campaign featured candidate Donald Trump calling for a wall on the Mexico-US border and the deportation of 11 million unauthorized foreigners, and the British voted 52-48 percent to leave the EU because of "too much" intra-EU migration.

Turkey features prominently in the EU migration debate. Turkey hosts over 2.5 million Syrian migrants, and in summer and fall 2015 many Syrians and others left Turkey's western coast for nearby Greek islands, from which they traveled by ferry to Piraeus and then by bus, train, and foot north through the Balkans to Hungary, Austria, and Germany. When Hungary in September 2015 fenced its border with Serbia and blocked migrants from continuing their journeys, German Chancellor Angela Merkel welcomed Syrians saying, "wir schaffen das," or we can integrate Syrian refugees.

The result was a mass migration of over 1.2 million migrants to the EU, including over a million to Germany and a record 12,000 arriving September 12, 2015 in Munich. The EU took steps to reduce the influx that centered on having Turkey block smugglers from taking migrants to nearby Greek islands. In return, Turkey agreed to accept the return of any migrants who reached Greek islands from Turkey and received E6 billion to care for Syrians, visa-free access for Turks, and a renewed focus on Turkey's bid to join the EU.

Since the EU-Turkey agreement went into effect March 20, 2016, the flow of migrants from Turkey has slowed and the focus has shifted to the integration of Syrian and other migrants who have settled in EU countries. Little is known about their education and skills, but emerging data suggests most are low-skilled, with considerable variation by country of origin. Overall, about 60 percent of the migrants who arrived in 2015 are considered low skilled (without occupational certificates), 30 percent are medium skilled with secondary school educations and certificates, and 10 percent have university degrees. Syrians were most likely to be medium- or high-skilled. 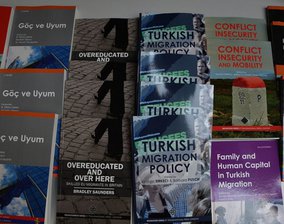 Integrating newcomers requires convincing employers to take a chance on workers with limited local language skills and credentials that may be hard to evaluate. There are two extremes on the integration spectrum. At one end are those who want to "invest" in migrants so that they learn the local language and acquire skills and are empowered when they seek jobs. At the other are those who say migrants should getting into jobs as fast as possible, even if wage subsidies or subminimum wages are required to persuade employers to hire them.

There are pros and cons of each approach. In Europe's well-regulated labor markets with ever-fewer low-skill jobs, pushing migrants into work quickly may result in intense competition for the relatively few jobs available to low-skilled workers. Work-first strategies can also result in more working poor families, those with employed workers but with low incomes. The default strategy in Europe is to invest-first, which some economists fear may make it hard to move migrants from tax-free benefits to taxable earnings.

The integration of children occurs in schools, where the integration picture is mixed. Children born abroad or born to immigrant parents often have poorer test scores than native-born children, and some identify with their countries of origin than the country in which they are going to school, as with some Turkish pupils in Germany and Sweden.

The 52-48 vote for Brexit came as a surprise, with consequences that are still unfolding. The London area with the UK's highest share of foreigners voted strongly to remain in the EU, while most other areas of England voted to leave. Prime Minister David Cameron promised in 2010 to reduce net migration to the UK to less than 100,000 a year, but net migration was 333,000 in 2015, including 184,000 intra-EU migrants. Most leaders of the major parties, Conservatives and Labor, favored remaining in the EU. 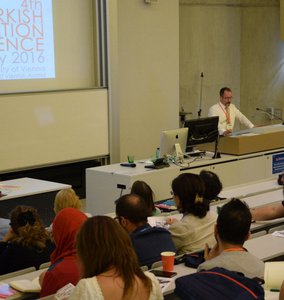 Conference participants presented papers on a wide range of topics, many of which focused on Syrians and other foreigners in Turkey and Turks in various European countries. The overall picture is mixed, with many stories of Turks successfully integrating in EU member states and their children achieving more than their parents as well as stories of discrimination, segregation, and alienation from host countries.

Migration tends to bring out the best and worst in local residents. Almost 90 percent of the 2.7 million Syrians in Turkey live in Turkish cities and towns, where their presence has prompted volunteers to help them integrate and sometimes led to tension with local residents, especially in areas where the Turkish government is actively fighting separatist Kurds. Many Turks have welcomed the Syrians, and some tried to protect Syrians from local protestors.

Many of the presentations focused on Turkey, a country of 75 million with five million or almost seven-percent of abroad, including four million in Europe and over two million in Germany. Per capita GNI was $11,000 (nominal) in 2013, compared with $47,250 in Germany, a ratio of one to four. Turkey's economic growth averaged four percent between 2000 and 2014, sharply raising per capita GDP, but growth was very uneven, falling over 10 percent in 2001 and 2009 but then increasing over 10 percent in recovery.

Turkey hosts more refugees than any other country. Given its history of emigration, Turkey is struggling with how to deal with Syrians, giving them a temporary protected status while hoping that conditions in Syria stabilize so that the Syrians can return to Syria. Tensions are rising in Turkey between President Recep Tayyip Erdoğan and the ruling Justice and Development Party (AKP) and the more secular institutions that have dominated Turkey since its founding in 1923. These tensions erupted in a failed coup attempt led by the army in July 2016.

The TMC will take on global dimensions in 2017, dealing with migration movements that involve Turks as well as migrants from many other countries.