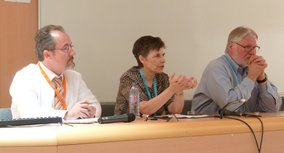 The Gifford Center co-sponsored the Turkish Migration Conference 2015, which attracted 200 participants to Charles University in Prague for three days during which over 140 papers were presented in parallel sessions.

Mexico, Morocco, and Turkey have five to 10 percent of people born in their countries living abroad. In all three countries, the process began with the recruitment of low-skilled guest workers to fill jobs in agriculture, construction, and manufacturing who were expected to return when seasonal jobs ended or after a year or two abroad. Many and perhaps most guest workers returned as expected, but enough stayed and formed or united families that there are now significant Mexican communities in the US, Moroccan communities in France, and Turkish communities in Germany.

Labor recruitment stopped in the 1960s and 1970s, and destination countries have been worried since about ever more migration from Mexico, Morocco, and Turkey. However, all three countries have become net immigration countries, meaning that more foreigners move into them than natives leave. There are many reasons why Mexico, Morocco, and Turkey have made migration transitions in the past decade, including the integration of these countries into the global economy and faster economic and job growth.

Conference participants presented papers on a wide range of topics, from the US experience with immigration and integration to changing Turkish policies toward minority Kurds. Princeton’s Doug Massey argued that US policy makers misunderstood the realities of Mexico-US migration dynamics, converting what had been a seasonal and circular flow of Mexican men into settled Mexican families by painting Mexican migration as an invasion, which led to more border enforcement and settlement in the US. SMU’s Caroline Brettell studied immigrant integration, and found that immigrant participation in home-country institutions in the US does not prevent and may speed integration into the US.

Turkey is a country of 75 million with five million or almost seven-percent of Turkish born residents abroad, including four million in Europe and two million in Germany. Per capita GNI was $11,000 nominal in 2013, compared with $47,250 in Germany, a ratio of one to four. Turkey’s economic growth averaged four percent between 2000 and 2014, sharply raising per capita GDP, but growth was very uneven, falling over 10 percent in 2001 and 2009 but then increasing over 10 percent in recovery.

Turkey hosts over two million Syrian refugees today, making it the host to more refugees than any other country. Given its history of emigration, Turkey is struggling with how to deal with Syrians, giving them a temporary protected status while hoping that conditions in Syria stabilize so that the Syrians can return to Syria. Meanwhile, some of the Syrians in Turkey try to reach northern European countries such as Germany and Sweden where there are established Syrian communities, contributing to the wave of migrants crossing the Mediterranean.

The major challenge in Turkey and Mexico is to raise employment and productivity. In industrial countries, about half of the population is employed, such as 52 percent in Germany in 2014 and 47 percent in the US. However, in Turkey, only 32 percent of residents are employed, and in Mexico only 40 percent are employed. With birth rates in Turkey and Mexico at replacement levels, both countries risk losing out on the demographic dividend, the boost to output in many Asian countries that arises when women have fewer children and go to work in export-oriented manufacturing industries, raising wages, taxes paid, and export earnings at a time when governments benefit from less need to spend on the young and old.