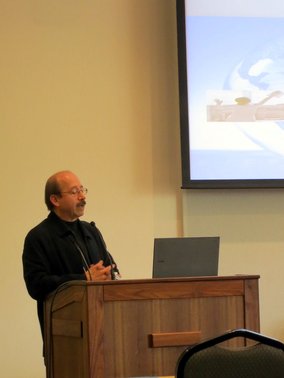 The Gifford Center for Population Studies co-sponsored a research conference October 25-26, 2013 that explored patterns of employment in the informal economy and the characteristics of workers employed by informal businesses.

Over 100 participants heard 20 speakers discuss what the ILO has long called the "dilemma of the informal sector." On the one hand, the informal sector, meaning firms that are not enrolled in programs that provide work-related benefits and are not covered by labor laws that establish minimum wages, employs over half of the labor force in many developing countries, including middle-income countries such as Brazil and Mexico. On the other hand, the ILO is committed to decent work, meaning the creation of jobs that offer wages adequate to support a family, work-related benefits, and rights at work, including the right to form unions. 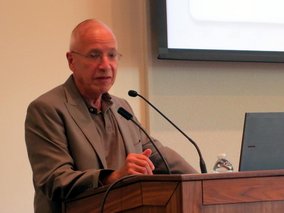 On the other hand, expanding coverage and aggressively enforcing tax and labor laws to encourage informal firms to become formal can push some out of business or underground, reducing the number and quality of jobs. The ILO is reluctant to follow the prescriptions of some and urge reductions in work-related benefit programs and labor market regulations to make it "easier" for informal firms to become formal, but recognizes that many informal firms will never be able to make the transition to the formal sector, at least as it is currently defined and regulated.

Many researchers study particular groups of workers employed in the informal sector of industrial countries, such as day laborers who often congregate in the parking lots of building supply stores to seek construction-related jobs on a day-by-day basis. Other informal sector workers, who are often immigrants, are employed in private households and in agriculture. Many of the employers of day laborers are self-employed craftsmen who hire workers as needed to help them to complete remodeling or repair jobs on private homes, and often pay the workers they hire in cash.

Some day labor markets are linked to worker centers that try to establish minimum wages for the workers who congregate to seek jobs and provide them with information on worker rights. These worker-center-affiliated labor markets can sometimes slightly raise worker wages, but they appear to do little about the uneven demand for workers. On most days, at least some day laborers are not hired, and when they are hired, many work for less than an eight-hour day at perhaps $10 an hour (the federal minimum wage is $7.25 and $8 in California). 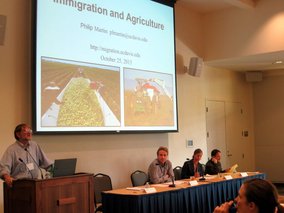 Household and farm work are different. The cleaning of private homes tends to be done by individuals, often immigrant women, who find jobs via word-of-mouth and by national and regional firms that provide a standard service and carry insurance against worker injury and theft. Some individual cleaners have been able to establish businesses to clean a number of homes, often hiring other immigrant women to help them. Most of these businesses are informal in the sense that many homeowners pay cleaners in cash and the cleaning jobs rarely offer work-related benefits.

Most farm workers are employed in formal sector jobs, covered by minimum wage, safety and health, and related labor laws. Most are paid by check, but sometimes laws covering farm work provide exemptions, so that farm workers may have a lower-than-usual minimum wage in some states or be ineligible for unemployment insurance benefits if they work on small farms. In most of the US, farm employers are not obliged to bargain with farm worker unions.

Wages, benefits, and working conditions for farm workers vary widely across the US. In California, which has a third of US hired farm workers, wages and benefits are better than average and farm workers have union organizing rights. The hardest-to-police segment of the farm work force, that brought to farms by labor contractors, is expanding fastest. Labor contractors serve as risk absorbers in labor markets marked by labor law and tax law violations, such as hiring unauthorized workers and not paying all of the work-related taxes due on their wages. 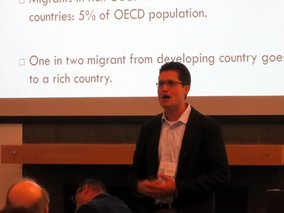 Norway, the world’s richest country, has a shrinking number of farms, about 45,000, including a sixth that hire some workers. In 2011, there were about 55,000 people employed in agriculture and forestry, and another 15,000 in fishing and aquaculture, in a labor force of 2.6 million; only about 3,000 of the workers in agriculture and fishing were considered temporary.

Producers of labor-intensive fruits and vegetables hired migrants from lower-wage EU countries such as Poland, but the average hourly earnings of farm workers have continued to increase over the past decade, from $13 to $17, in part because heavily subsidized Norwegian farmers do not want to be accused of "exploiting" migrant farm workers. Polish and other migrant farm workers often live on the farms where they work for the several months they are in Norway, and there are reportedly few issues with their employment. 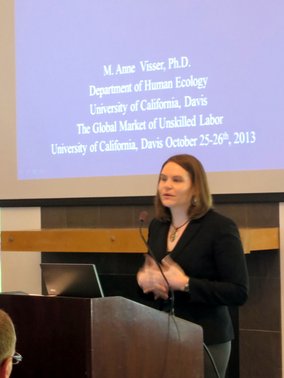 The link between informality and migration is apparent in Latin American migration to the US. Countries such as Mexico have formal sectors that provide extensive benefits and protections to the one-third of the labor force employed there, but do little for the two-thirds of workers in the informal sector. The US has a relatively flexible labor market, allowing Mexicans and other Latin Americans in the informal sector with little prospect to move into formal sector jobs to migrate to the US, where they may find low-level formal or informal jobs. This migration serves to protect Latin American elites by providing an escape valve and some US industries who get cheaper labor.

Given the difficulty changing economic policies in Latin America that benefit elites or reducing the demand for migrant workers in the US among the particular employers who benefit from them, some urge a guest worker program to formalize what has been largely an unauthorized flow of workers, which increases their vulnerability. A guest worker program based on a minimum income support level in migrant-sending countries, such as Mexico’s Opportunidades, and a core set of labor rights for Mexican guest workers in the US that included incentives to return at the end of work contracts, could help to make currently informal work more formal. Such a guest worker program would likely require bilateral agreements to coordinate return incentives, including payments to migrant worker families in sending countries and refunds of social security payments by receiving countries.

The economic benefits of immigrants to migrant-receiving countries are greatest when the migrants are different from natives in age and skills, as when youthful and low-skilled migrants complement older and more skilled natives. Immigrants to the US are generally younger than the US born, and they are concentrated at the extremes of the education ladder: about 40 percent of US workers without a high-school diploma were born outside the US, as where 40 percent of PhD holders in STEM occupations. Since 85 percent of immigrants to the US are from poorer developing countries, the remittances and ideas they send home can spur economic development in migrant countries of origin.

How should richer countries that migrants want to enter react? Most economists urge opening front doors to legal immigrants and side doors to temporary workers wider. If there is full employment, newcomers will find the jobs paying higher wages that they seek, and their children can be educated in host-country schools so that there is less danger of non-integrated second-generation residents.

Some sociologists note that the same inequalities that motivate migration also create new inequalities as they increase heterogeneities. During the industrial revolution, the dividing lines were capital and labor, so that reformers could urge workers of the world to unite. Today, societies are sensitive to gender, ethnicity, legal status, religion and other differences among residents, and residents may be organized in smaller interest groups, making it harder to achieve consensus.

Migration can have opposite effects on employment. For example, household work that was previously non-wage work can become wage work if immigrant cleaners are available, and what had been formal construction jobs can become informal if immigrants are available and subcontractors hire them as needed. Social mechanisms such as exclusion, hierarchy, opportunity hoarding, and exploitation can act to include or exclude particular groups of immigrants.